“Shadow-Corona” observed on top of Fichtelberg and Zugspitze

It is not unusual that one can see some shadow rays in the sky due to clouds in front of the sun. One can also observe coronas in consequence of diffraction of the sunlight or moonlight by small waterdrops of thin clouds. But it’s a rareness to notice both phenomena at the same time.

It would be even more interesting to be at the top of a mountain with the clouds very close. So, thin wisp of clouds racking only a few meters over your head. Sometimes these wisps cause also beautiful coronas. If a building or a mast obliterate the sun, its superstructures can cast long shadows into the clouds.

Kevin Förster observed both phenomena on top of the Fichtelberg Mountain (Erzgebirge) on January 24th, 2015. This time the sun was behind the tower of the weather station and the different appliances at the top of it afforded the shadows. The origin of the clouds was found in the “Böhmische Becken” situated at the southern slopes of the mountain range. Therefrom they drifted into the direction of the Fichtelberg Mountain. First it consisted of ice crystals and caused ice halos. Over the Fichtelberg there were widespread clouds of waterdrops, which caused a nice corona additional to the shadow rays. 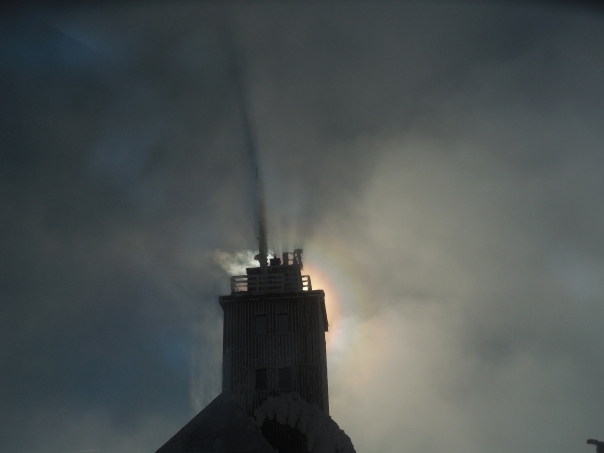 “Shadow-corona” at the top of the Fichtelberg. (c) Kevin Förster.

A similar event was observed on Mount Zugspitze in the Bavarian Alps by Claudia Hinz on May 5th, 2013. The sunlight was blocked by a mast and its shadow fell on very thin clouds. Simultaneously there was a bright corona. (1–2–3–4–5)

In both cases the sun was lower than the top of the tower so that the shadow of the tower was projected on the cloud layer above. This is a very uncommon phenomenon.

Posted in coronae and iridescence, observations, shadows and rays

Light phenomena in a mosquito net

In August 2013, Ujj Ákos from Bátonyterenye in Hungary noticed light phenomena in a mosquito net for several times. There were phenomena visible (1–2–3–4) which resembled halos, similar to those in a spider web which Christoph Gerber photographed, but also iridescent colours were visible (1–2). Unfortunately, it is difficult to see what exactly causes the brightenings, although one can assume that they are caused by forward scattering of light along the different threads. But a mosquito net has no radial structure. So the reason of the phenomena probably lies in the grating of the net causing colourful light diffractions.

Diffraction patterns in fabrics can differ significantly and depend from the material used and its mesh. So crosses and paths of light are formed like those in this picture, or different kinds of coronae which can be seen here.

All you need to get them is a spiderweb between yourself and the sun and a device to block the sun. I used my self-made filter usually used when photographing halos, made of a small piece of black slide film inserted on one end of a ball pen’s tube. It has the right transparency to show also the contour of the sun disc on the photographs (Foto 2). One of the best pictures I get is this (Foto 3).

The spiderweb-halos belong to the general phenomenon called “Circles of light in treetops” (M. Minnaert, Light and Colors in the Outdoors (1993), §29: Foto). As seen on the pictures, the bright forward scattering part of each thread is that one, which is perpendicular to the sun. These segments form an (interrupted) circle between the spiderweb centre and the sun.

Taking several pictures I discovered the dynamics of the spiderweb-halos (Foto 4). The diameter of the circle increases with increasing distance of the sun from the centre of the web (Foto 5), until the halo becomes a dim and open circle segment when the sun is far outside the web (Foto 6). With the sun in the centre of the web, the whole web will be lit up as a “full halo” (not perfectly realized in Foto 2).

An outer circle segment may also be seen, depending on the construction of the web (Foto 4). Another feature of the spiderweb-halos known to halo observers is the “pillar” between the sun and the center of the web. The pillar may vary in appearance from a truly pillar-like structure (Foto 7) to a triangular segment (Foto 8). The pillar may also be seen outside of the sun (if the sun is located near the centre of the web; Foto 9) and extend to the other side of the center of the web (“counter-pillar”, Foto 7).

The full-scale of  “spiderweb-halos”  is shown in this very schematic diagram – it visualizes also why I termed them “halo”: all appearances are known also to the atmospheric halo observer.