← Three quarters of a double rainbow, plus an accidental snapshot of a tertiary, Mt. Zschirnstein, Germany, May 15th, 2016
Twinned rainbow from Russia →

Crepuscular rays from above and below

Yesterday there were observations of spread Crepuscular rays over Germany. The satellite image shows the origin of the long shadows: a powerful squall line over northwest Germany. The length of the shadows is about 400km – this is enormous! 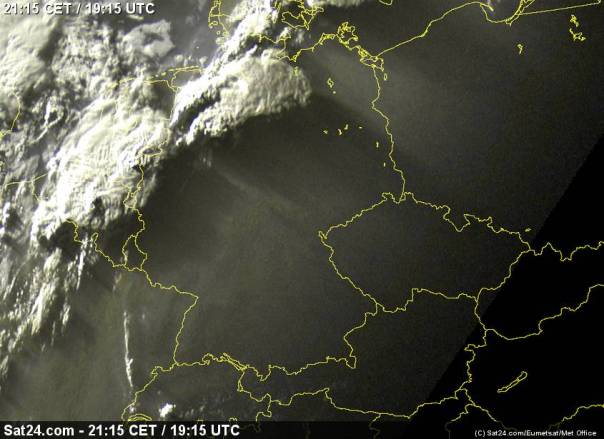 Near Pforzheim in Baden-Württemberg Michael Großmann observed rays passing from the setting sun to the antisolar point. Rene Winter was in the district Gotha, Thuringia and saw crepuscular rays that were unusual intensively. Laura Kranich in Kiel wasn’t far away from the thunderstorms and had intense Crepuscular rays, too. There were single beams that ran across the entire sky.

Crepuscular rays are rays of sunlight that appear to radiate from the point in the sky where the sun is located. These rays, which stream through gaps in clouds (particularly stratocumulus) or between other objects, are columns of sunlit air separated by darker cloud-shadowed regions. Despite seeming to converge at a point, the rays are in fact near-parallel shafts of sunlight, and their apparent convergence is a perspective effect (similar, for example, to the way that parallel railway lines seem to converge at a point in the distance).

The name comes from their frequent occurrences during twilight hours (those around dawn and dusk), when the contrasts between light and dark are the most obvious. Crepuscular comes from the Latin word “crepusculum”, meaning twilight.

← Three quarters of a double rainbow, plus an accidental snapshot of a tertiary, Mt. Zschirnstein, Germany, May 15th, 2016
Twinned rainbow from Russia →