The Hungarian observers Attila Kovács and György Répás witnessed an unusual kind of refraction. The temperatures in the exhausts of smokestacks differ widely within a small space, which causes very bizarre distortions of the sun.

Attila reports that such strangely distorted solar disks can be seen almost every day in the exhausts of smokestacks. So it is worth while trying it by yourself to get a live impressions of physics.

Photographs:
Attila Kovács at the hospital of Eger, November 11, 2014: 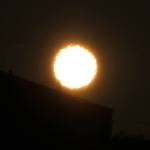 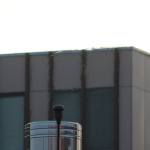 Mirages in front of solar disk

On June 7, 2014, there was an especially interesting sunrise on Mt. Zugspitze. There was not the green flash I expected, but the miraged mountains of the Bavarian Forest showed up in front of the rising solar disk (image series). According to calculations of the position of the rising sun and Ulrich Deuschle´s panorama program the mountains visible in the mirage were probably Mt. Hoher Filzberg (1279 metres) and Mt. Sulzriegel (1260 metres), which are 252 kilometres away. The mirages were only visible in front of the solar disk, apart from that visibility was only at 60 kilometres, which is not enough by far for seeing the Bavarian Forest from here.

In clear air, the Alps are visible from Munich. In the morning of October 18, 2012, Frank Sievers observed this superior mirage of the Alps from the roof of a house behind the Perlach heat and power station. It was probably caused by layers of air of different temperature generated by the power station, which refract the light at different angles to the observer´s eye.

One day later, in the morning of October 19, 2012, the unusual mirage was visible again. This photo taken Stefan Rubach from the same Rooftop.

At sunrise during the transit of Venus on June 6, 2012, there were not only distortions of Sun and Venus visible as well as the Green Flash, but there were also several observations of the so called Etruscan Vase.

As weather forecasts for Germany´s sunniest island, Fehmarn in the Baltic Sea, were most favorable for that day, Jens Hackmann flew there from the bad weather of his home town Bad Mergentheim. Just after sunrise at 4.41 hours, he observed the mirage effects mentioned above not only on Sun and Venus, but also on a passing ship. And only a few moments later the Etruscan Vase phenomenon appeared, an upside-down mirage of the sun which appears in most cases above a water surface (more pics and film).

Thomas Stemmler photographed the transit of Venus at beach on the Baltic Sea near Dahme and could shot mirage effects and the phenomena of Etruscian vase also.

This strange effect is caused by the refraction of sunlight together with a lower mirage and appears when a layer of cold air is positioned over a warm water surface. The lowermost air layer, which is heated up by the warm water, has a lower refraction index than the air at the level of the eyes of the observer. Sunrays hitting this layer in a very sharp angle can be reflected totally. So the observer does not only see light coming directly from the sun, but also light that had been reflected by the warmer and less dense layer of air directly above the water. The rays coming directly from the sun let the sun appear totally normal. But as our brains are not programmed for totally reflected sunrays, they extrapolate them lineally. This makes us see an upside-down reflection of the sun beneath the real sun which changes due to the angle of incidence of the light and thus with the sun elevation.

This phenomenon reminded the science-fiction-author Jules Verne of a paunchy Etruscan Vase standing on a pedestal, so he coined this term for the phenomenon.

On June 06, 2012, the rare constellation of the planet Venus crossing through the solar disk could be observed from the day side of the earth.

When in Germany the sun rose, the Venus transit was already in its final stage. Where the sun passed through differently dense air layers during its rise, the mirage phenomenon was visible, i.e. the sun as well as Venus appeared distorted or as a combination of multiple images. These effects are due to the different bending of the light waves at air layers of varying density. Moreover, an incident ray of light will be reflected at the interface between cool and warm air. When there are more than one of these interfaces, multiple reflection might occur.

Rico Hickmann could even observe the Green Flash during the Venus transit from Dresden: “I was incredible lucky with respect to the weather. Yesterday evening, it was still very cloudy, and after the end of the transit there were again clouds filling the sky. Before sunrise, a light pillar could be seen, that served as a pointer towards the sun. The sunrise over Dresden was spectacular, Green Flashes and disconnected segments… I’m still speechless.” Here are some more incredible pictures from this series: 1–2–3–4–5

Another spectacular image of a triple Venus was obtained by Frank Killich, who observed the Venus transit from the Wolfswarte in the Harz mountains (916 m / 0 °C). The image is a single frame from a HD video file.

Some more and equivalently wonderful observations were reported.  Alexander Haussmann made a Video showing a triple Venus, green segments and distorted Venus passing through different air layers that were responsible for the green segments some seconds before. Further examples of impressive green flashes are the pictures of Andreas Möller, taken in Zinnowitz (photo and and animation as gif or MP4 [better quality]) and Hermann Koberger from Fornach, Austria (1–2–3).

On June 26, 2011, Laslo Segi could photographically record this nice moment. “It looked like a second sun rising from the sea, although the sun was just setting.”(1)

“Some time later I learned that it was a lower mirage, that means that the sky is reflected upwards by a thin layer of warm air above the ground.”

This is caused by air layers of different temperature. At the boundary surface, light is totally reflected causing these phenomena. This phenomenon, however, is called “Omega-sun”, because the shape of the sun is similar to the Greek letter omega.