← Unusual Twilight Phenomena in Europe
Quinary rainbow in lamplight, plus a twisted primary and nice supernumeraries →

How you can photograph tertiary rainbows every night

After almost 7 years since the first successful documentation of higher-order rainbows, we are now aware of at least 40 photographic observations of tertiary bows, sometimes accompanied by quaternaries. It is the more surprising that so far no one seems to have tried an outdoor experiment using artificial light and drop sources to bridge between the natural observation and single-drop scattering experiments, in which caustics are projected onto a screen.

Such an outdoor setup does not only allow to test various cameras and post-processing methods, but may also help to introduce newcomers to the challenges of observing higher order bows against the intense zero order background. Also very practical issues such as drops on the front lens or wet cameras can be directly experienced.

The setup is quite similar to what is used for diamond dust halo observations in Finland. The experiment is carried out at night in order to exploit the optimal background conditions of a dark sky. A bright searchlight lamp creates an almost parallel light beam with small opening angle, in which the camera is placed. Direct illumination of the camera is blocked by a cardboard disc placed roughly halfway between lamp and camera. This also helps in the case of photographing primary and secondary rainbows (i.e. the lens is pointing away from the light source), as stray light entering through the viewfinder on the camera backside can spoil the pictures.

I tested both Xenon (HID) and halogen lamps in the power range of 50-100 W. While Xenon lamps are brighter at the same power consumption, their non-thermal emission spectrum may lead to rainbows whose color is dominated by blue and yellow only, also the emitted light can show unwanted yellowish tinges in certain emission directions. The pictures shown here were therefore taken using the 100 W halogen lamp.

Drops were created by an ordinary spray bottle and, as judged by the appearance of the rainbows, are somewhat smaller than the ones in natural rainbows. Due to wind or movements of the bottle a spatial separation of smaller and larger drops can occur, as indicated by several well formed supernumeraries on both the primary and secondary rainbows which become visible for some moments. However, I decided not study these detail here, and tried to create a more or less spatially homogeneous spray including all available drop sizes over the exposure time of 2-5 s for each picture.

This is how the primary and secondary rainbow look like:

At that time, there was also some light natural drizzling going on, which generated only a weak primary rainbow in the lamplight. The limiting factor here is not the much lesser density of drops than in the spray (this could be helped by longer exposure times or stacking), but rather the background illumination of the sky (the pictures were taken in my garden in Hörlitz, Germany, which is a rather rural, but still pretty illuminated place, and there was also the nearly full moon behind the clouds on the evening of April 1st, 2018). 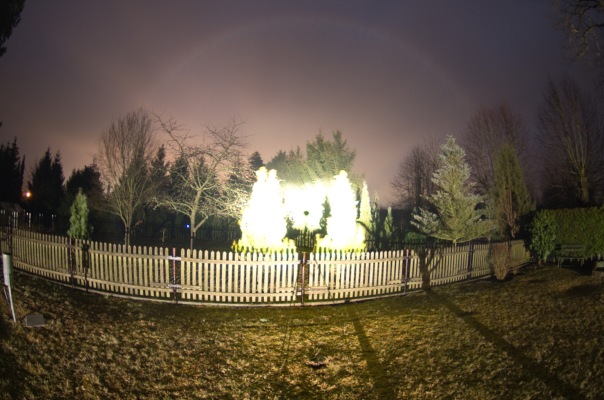 When reversing the camera viewing direction, the zero order glow (=light which is transmitted through the drops without reflection) is, as expected, the dominant feature in the photographs:

After strong unsharp masking, the tertiary rainbow is extracted, and can be traced almost completely around its full circumference:

As the camera was directed straight to the lamp (and rainbows thus appear as circles around the image center), it is possible to apply a radial smoothing filter to enhance the visibility further: 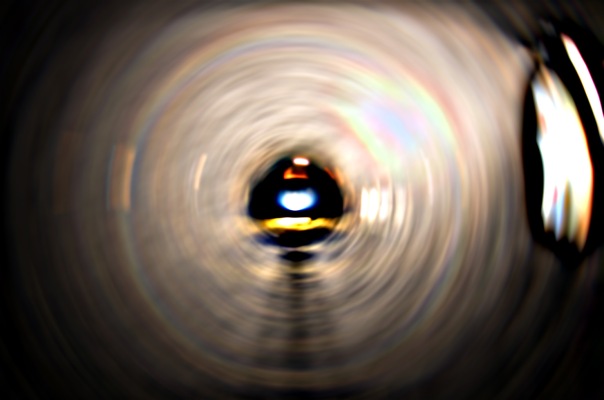 Here is another picture, taken with the same settings and processed similarly, which clearly shows in addition the quaternary rainbow in the upper left quadrant:

A major problem is that drops on the front lens disturb the recorded rainbows massively, as becomes apparent after unsharp masking. This problem is especially severe when using a fisheye lens (which does not have a suitable lens hood), and under windy conditions which shift the drops into unexpected directions due to swirled gusts near the ground. Periodical wiping of the front lens is therefore indispensable. Of course, the camera itself should be proof against spray water.

It is known from calculations that the contrast of the tertiary rainbow lies close to the detection limit of the human eye (see here and here), at least for purely spherical water drops. Here, no traces of it could be seen directly, even when looking through a polarizer. The main problem is that the spray lifetime is only a few seconds and the observer is constantly busy to maintain a more or less constant amount of drops in the air, which is rather distracting. A garden hose may be worth testing in the future.

So far, no unambiguous traces of the quinary rainbow (see here and here) could be extracted from Alexander’s dark band, in which its green and blue parts are expected to follow immediately the red rim of the secondary. There are several reasons which make its detection difficult here. At first, the drops are generally smaller and thus the secondary rainbow wider than in a natural setting. Next, the weak but non-zero divergence of the illumination may blur the rainbow positions further. Also, the background includes green plants in some directions which hinders the detection of green rainbow features. A more detailed study using a darker background and a narrower drop size distribution (with appreciable supernumeraries) seems necessary.

Posted on April 10, 2018, in experimental, rainbow and fogbow. Bookmark the permalink. 1 Comment.

← Unusual Twilight Phenomena in Europe
Quinary rainbow in lamplight, plus a twisted primary and nice supernumeraries →