About half of the participants under a diamond dust halo. Photo: Andreas Zeiske

The 13th meeting of German halo observers was a quite bountiful one as it presented halos on two of the three days. The location at the top of the western Ore Mountains, which straddle the German-Czech border with peaks surpassing 1200 m is well known for complex displays as documented by the organizers Claudia and Wolfgang Hinz. [e.g. 1–2–3–4]

Although this area was being readied for the skiing season, ice crystals from snow guns were not the dominant source for the observed halo phenomena. Rather, the local winter weather can make fog from the often persistent huge mass of cold air in the Czech/Bohemian basin ascending toward the mountain ridge, where it can precipitate as diamond dust. Claudia Hinz has also observed that it does not need to be below -10oC for good halo displays.

The Mt. Keilberg in a diamond dust cloud. Taken from Mt. Fichtelberg by Andre März.

As a case in point, during the meeting, the temperatures were between -2oC und -5oC only. However, clouds and fog were not coming from the South this time, but rather slowly from the Northwest. The photo taken on the evening of Nov. 27th, 2015, shows a hood composed of this ice fog covering Mt. Klínovec (Mt. Keilberg, 1244 m) as seen from Mt. Fichtelberg (1215 m) a few kilometers to the west. These two mountains are the highest peaks of the range, and both were accessed in less than 10 minute by car from our meeting place in the cosy winter resort Boži Dar (Gottesgab).

On that very night, the ice fog at Klínovec unfolded a wide array of lamp and lunar halos, namely the plainly visible 22°-ring, upper and lower tangent arcs, Parry arc, 46°-ring (or supralateral arc)  parts of the parhelic circle, and just bordering at visual detection Tape arcs, helic arc (from the Moon, however) and Moilanen arcs, as well as Minnaert’s cigar.

But there were daylight halos too, and it all started unexpectedly on the same day’s morning, when murky morning weather all of a sudden made room for ice fog precipitating into clear Southeastern skies. This also happened at the road toward and on the summit of Klínovec. Although being seasoned observers, most participants of the meeting had never stood in diamond dust and its halos. So, this day proved to be a spectacular experience for all senses, of course starting with the three-dimensional flickering of otherwise well-known halos up to the sounds and sights of ice crystals falling on their jackets like fine semolina.

Actually, one of the group, Reinhard Nitze, often refrained of looking at the halos, but rather collected and photographed the fallen crystals. These proved to be almost exclusively needles. This is compatible with the observed halos, comprising once again strong tangent arcs, a weaker 22o ring, and later then an occasional display of the suncave Parry arc and parts of the 46°-ring (or supralateral arc) and traces of the helic arc, outlined by individual glistening crystals in the zenith only .

The next display came to happen after a late lunch on Fichtelberg. In it, halos of the 22o family were nicely contrasted against a blue sky, with the upper tangent arc assuming a huge “longhorn steer like” appearance at times. Due to rapid variations in the thin drifting ice fog, many halos “pulsated” in 3D between a couple of meters distance and maybe 50 to 100 m. Not farther away than a few arm lengths, one could see both a weak 22o ring as well as a snow surface halo from the just fallen crystals. The whole display was ending with a blindingly bright pillar of light around the sun. 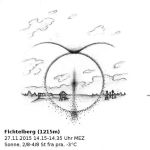 The second day (Nov. 28th, 2015) eventually saw a westerly snow and rain front drawing in, but in the early morning  there were halos, once again on Fichtelberg (22° ring, UTA, and 46o ring und mehr?).

For the subsequent interesting talks and demonstrations by Elmar Schmidt, Alexander Haußmann, Claudia Hinz, Michael Theusner, Georg Dittié, Kevin Förster, Reinhard Nitze, Michael Großmann, Thomas Klein, and Richard Löwenherz, which formed the other major part and reason of the meeting, the reader should refer to the German language publications [1].

Before leaving for their respective homes, on Sunday, Nov. 29th, 2015 the group was given a tour of the Fichtelberg active mountain top weather station which by now was surrounded by a thick ground cover of snow.